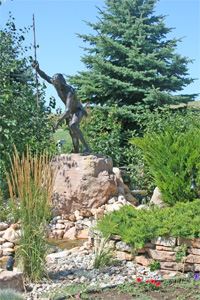 The City of Spearfish was established in 1876. Gold fever brought people to Spearfish and the City began to grow rapidly. By 1890 the population of Spearfish had grown to 671. The City is named after the creek that runs through it. The Native Americans that used to spear fish in the clear waters gave the creek its name.

Since then there have been 42 appointed City Marshals/Chiefs of Police. Along with the traditional police duties the Chief/Marshal jobs included being the Street Commissioner, Pound Masters and Fire Wardens. Chief/Marshal did this duty at a rate of $75 a month.

Going Without a Chief or Marshal

Several times in our history the City went without a Chief or a Marshal. Between 1890 and 1893, there was no Marshal or Chief for the City. It appeared that R.F. Crawford maintained the only law enforcement. Crawford was known as the Police Justice of the Police.

During these years the City Council had petitions presented to them for the appointment of a Chief. It wasn't until February 1st 1893 that Mayor G.C. Favorite finally appointed our 7th Chief Benjamin F. Lazelle.

Other times during our history the City of Spearfish hired guards and did not have a Chief or Marshal. During the time of May 7 1918 to November 4, 1918, the City hired 2 guards. They were hired from Company K and were referred to as The Spearfish House Guards. Their primary job was foot patrol in the areas of the business part of town, the railroad yards and the flourmill. They were also required to work nights from 8 p.m. until sunrise.

After November of 1918 the only law in Spearfish was the Pound Master E B. Dotson. Dotson's primary duties were like that of an animal control officer. From November until August 1920, the City did hire Night Watchmen. E B. Dotson was at one time considered for the Night Watchman position, but he was never appointed.

In 1920 the City finally appointed Richard Lawrence as City Marshal. Since then the City of Spearfish has had a Chief of Police, along with appointed police officers, a Deputy Sheriff (Ed Charboneau February 10th 1927) and Special Police.

In the summer of 1995 the Spearfish Police Department along with other city offices moved into the newly built Municipal Services Centre. The building is located at 625 5th Street Prior to that the Police Department was at 722 Main Street (Old City Hall).

Today the Spearfish Police Department is comprised of:

Since 1885, the population of Spearfish has grown to approximately 12,000 citizens.